Because I find this issue important, here’s an english version of the strange story of the blogger who gets sued in China. I couldn?t believe it until I saw the libel: A blogger from Germany gets sued before a chinese court ? because he wrote down his opinion. No, I?m not kidding. 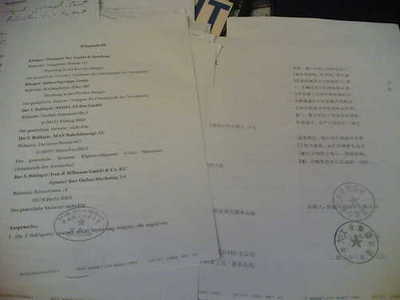 Background goes like this: Neoplan is a German producer of busses and part of MAN. They are building a bus called Starliner, which is praised because of its design. The Starliner was first shown in 2004. A couple of months later the Chinese producer Zonda presented a model called A9 ? which look astonishingly similar to the Starliner. So October last year Neoplan sued Zona in Beijing and announced this in a press conference. Several German media outlets reported this, for example the online edition of ?Der Spiegel?.

On October 22nd the weblog of Autoregional linked to the story in Spiegel Online. Autoregional is a site produced by the seo-company Iven & Hillman. The article is short und contains only one sentence, which could be seen as something like an offence: ?This example shows how fast und ruthless Chinese are when it comes to copying.? (in the meantime this sentence was deleted from the blog).

Now Iven & Hillmann received a libel. They are being sued by Zhongwei because of unfair competition: By making it public that MAN thinks, the A9 is a copy they hurt Zhongweis business. So they are ordered to show up in the Jiangsu High Peoples Court on July 17th, 9am Beijing-time.

It is a mystery why Autoregional is the chosen one to be sued. ?Just because their small? may be the simple reason. The offending sentence at least is not stronger than what the online edition of the German newspaper ?Die Welt? made their headline in October: ?Chinese steal bus design from MAN?. Iven & Hillmann now is in a dire situation: If they don?t react they coult be sued to a compensation that put the survival of the company at risk.

If this gets through blogger allover the world could be confronted with a bizarre threat: Being sued in a country far away ? just by exercising the given right to express their opinion.